The famous fighting franchise appears for the first time in HD on Wii U this holiday season, and on handheld for the first time on Nintendo 3DS on October 3rd. New characters, items, and arenas add a freshly revitalized look and feel. Amiibo will add a different dimension to the game as classic Nintendo characters interact wirelessly in the game. 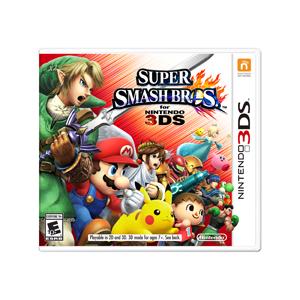 The best Nintendo heroes are in the palm of your hand

Battle as Nintendo's greatest heroes and villains, at home or anywhere on the Nintendo 3DS system! Smash rivals off the stage with epic moves, then shower your fighters with customizations and gear. Find fun extras faster by defeating hordes of classic enemies in Smash Run and mastering mini-games. Now you never have to stop breaking!

The multiplayer* experience you know and love is now perfectly portable, so wherever you go, you can build your character for the next version of Wii U. Take on newcomers like Mega Man and Little Mac, or join the battle! yourself and create new fighters by playing as a Mii character! To shake it up, go through a huge maze and defeat enemies for power-ups and customizations in Smash Run, then adjust your fighters' stats and moves. After besting your friends in local multiplayer, take the fight online* and challenge the world!

"It's a must-play for Smash fans" - Game Informer

"A perfect hands-on iteration of one of Nintendo's biggest franchises." - GamesBeat

All orders are processed within 1 to 2 business days (excluding weekends and holidays) after receiving your order confirmation email. You will receive another notification when your order has shipped. If you have any questions, please contact us at hello@poggers.com or call us at (262) 476-5047 to speak with one of our team members.